In Bridge Lessons: Counting & Card Placement Andrew explains the tips, tricks and techniques that will enable you to visualise the hidden hands. And the take advantage of what you have learnt. A must have for any aspiring Bridge player. 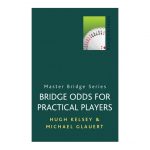 You might also be interested in Bridge Odds for Practical Players by Kelsey & Glauert, the leading book on learning, calculating and changing the odds in your Bridge games.

In Bridge Lessons – Counting & Card Placement Andrew explains the tips, tricks and techniques that will enable you to visualise the hidden hands. And the take advantage of what you have learnt. A must have for any aspiring Bridge player.

In a compelling format, each page contains a lesson, plus an illustrative deal. Not only will you further your understanding of the specific topic, but you will also learn more about the beauty of the game in general.

Andrew Robson is widely regarded as one of the finest Bridge player/teacher/writers in the world today. When not at his Club, Andrew travels the country, inspiring thousands at the many Charity functions and Master Classes he leads.

As a player, Andrew won the world Junior Championships in 1989, the European Championships in 1991, and the list of tournament successes during and since is too long to list. He won the Silver Medal in the 2004 World Individual, heartbreakingly moving out of Gold on the very last deal (but that’s another story…).

As a writer, Andrew began in the early Nineties writing for the Oldie, the Spectator and the Express on Sunday, and has now been writing for Country Life for nearly 20 years and Money Week for nearly ten. He is most famous, however, for his daily column in The Times. His clarity of style has seen him become universally acclaimed, and he is the author of Common Mistakes and How to Avoid Them, Need to know? Bridge, Bridge Secrets, What Should Have Happened, A Pack of Dos and Don’ts plus 20 books in his hugely popular Bridge Lesson Book series.

Andrew’s teaching is also legendary. Entertaining, simple, brilliant…his teaching has been described as this and much more over the years.

When not Bridging, Andrew loves to ride his mountain bike. He lives in North Barnes with his wife Lorna and two daughters, Hannah and Mimi.