We designed, developed and produced the British Bidder bridge bidding box with a clear goal. To reduce the amount of plastic that we consume and sell as a business. We decided to share our process and how we went about making something new for the card game Bridge.

A bridge bidding box is a piece of equipment used by players of the card game Bridge. It is a box containing 48 printed bidding cards, enabling a player to place their bid silently. A set of four is used, one per player. The bidding box and bidding cards were invented by Per Jannersten of Sweden. These went on to become an essential piece of equipment in tournaments and clubs. Increasingingly they’re also used for social bridge in small clubs and in homes. Jannersten is still the leading supplier.

Before the British Bidder, all of the bidding boxes available were made in the Far East, with the exception of Jannersten’s boxes which are still produced in Europe. The air miles involved in transporting the stock to the UK was one of the problems we wanted to solve. Secondly, apart from a small number of sets made from wood which are much more expensive, the bidding boxes are made from moulded plastic. There is a global plastics pollution crisis so this was another issue to resolve. Lastly, apart from the more costly wooden sets, the plastic boxes are functional and utilitarian and, as such, not suited to the home market.

The Design Process for an Entirely New Bridge Bidding Box

During this process we physically took apart current models of bidding box. This allowed us to discover how current bidding box designs solve the problem of showing bidding cards during play and storage of cards at the end of the game.

Following on from this we then looked at how the boxes functioned technically. Using fixings such as pivots, clips, hinges and internal structures that supported the bidding cards either during play or in storage. 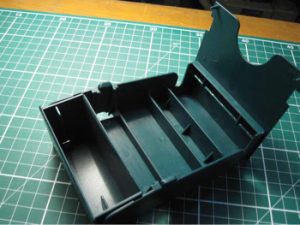 Jannersten Bid Buddy is made from molded plastic and uses pivots and clips. It also has supportive struts inside. 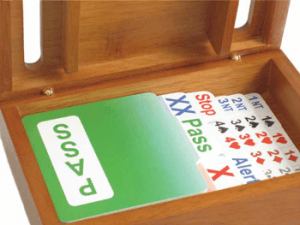 There were some interesting designs of paper-over-board boxes and folding cartons that we considered. 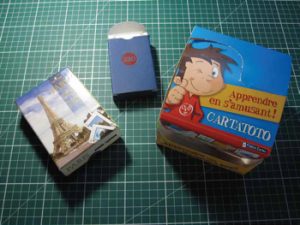 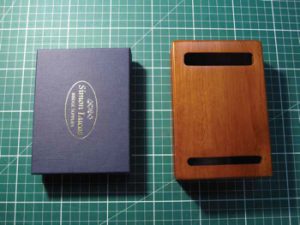 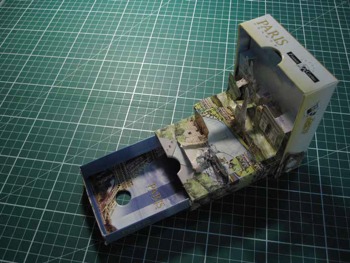 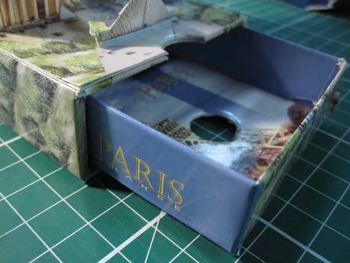 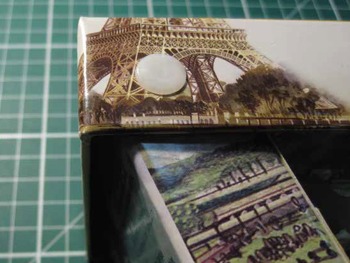 The design above had a lot of scope for adaption. It has a drawer where the bidding cards could be stored and lid that opens to an upright position. However, it relied on plastic pivots which contaminates the waste stream at the end of the life of the product.

Our development phase then progressed to idea generation. Sketching out different options and noting design decisions that needed to be included in the final design. 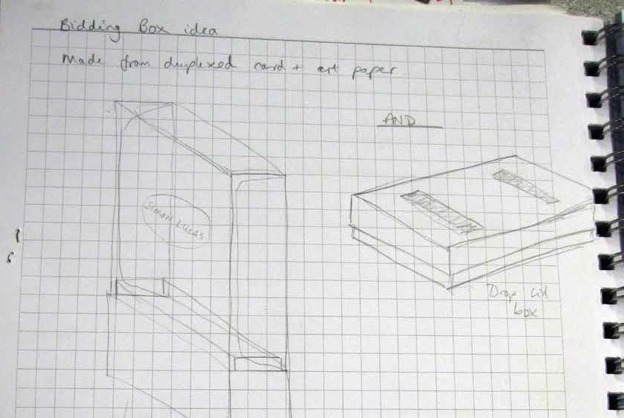 The most technically straightforward solution would be to make a simple drop-lid box like a playing card presentation box and incorporate two slots in the top for the bidding cards, similar in style to the wooden bidding boxes. However, this idea was discarded because we thought that they would look too much like a set of four playing card boxes on the table, especially as we intended making them from paper-over-board.

We worked through several ideas centred around a small box that contains the bidding cards, and then a sliding or folding cover (as pictured in the sketch). We prototyped one of these ideas. But we needed a technical material to clip the box shut, so we went back to the drawing board. 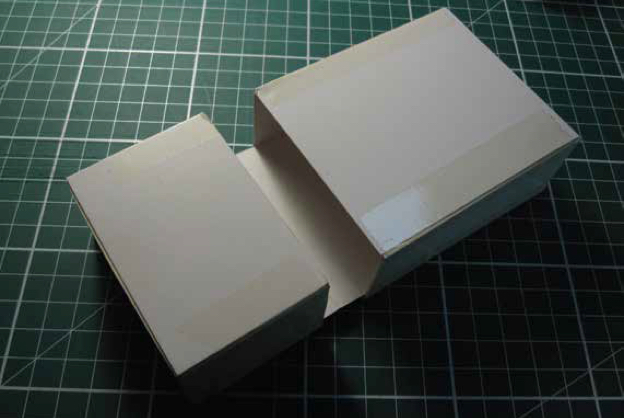 Mainstream boxes are made from molded plastic including pivots and clips. The wooden bridge bidding boxes use metal hinges, to enable their components joined together. Our breakthrough moment was when we freed ourselves up from trying to do the same. It was then that the idea of making the British Bidder box from separate, unconnected components came to us. 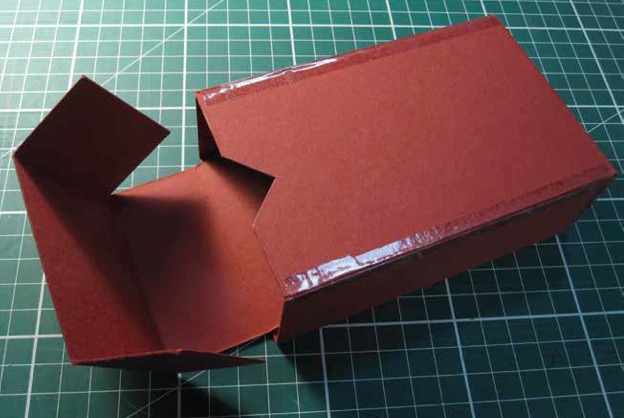 We trialled using dyed board-stock to solve the problem of bare box board showing through die cut windows, slots or holes. We used a small ‘v’ as a thumbhole but this is tricky to produce to so we widened it to full side ‘v’ in subsequent prototypes.

Evolution of the Idea

Our idea evolved naturally into splitting the box into two separate components. The base and lid fit together in different ways for play and storage. There is a window in the lid which the base slots into during play. This gives the box stability. At the end of play, the base slots into the bottom of the lid and the cards are stored inside. 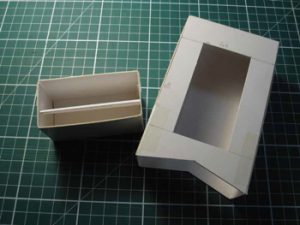 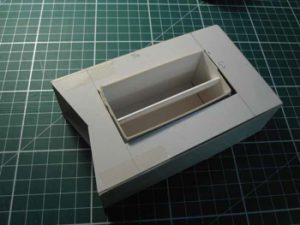 The next complications to overcome were how to block the window when the box was in storage, and how to stop the base (which is much shorter than the lid) going too far in to the lid. The answer was to attach a full height panel to one of the long sides of the base. This solved both of the above challenges, and had the benefit of supporting the bidding cards.

We’d developed a box design that met our objectives. The next stage was several rounds of prototyping to refine the design and solve any technical challenges in production, such as the window. 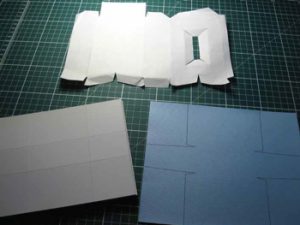 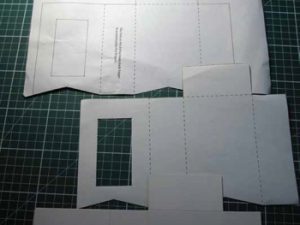 Solving the Problem of the Window

Windows are normally only found in book covers or case-style boxes that have been produced flat and then subsequently folded. This wouldn’t work for the lid of the British Bidder box. As we couldn’t produce it case-style, the next option we considered was die-cutting a hole through the box and paper covering as a final process. However, this would have left raw box board showing so wasn’t an option either.

We discussed the problem with one of the UK’s longest established and largest producer of luxury paper-over-board packaging. They advised that the only way was to die-cut the window as a final process, and it wasn’t possible to cover the raw edges. We persisted in the belief that it was possible. We eventually solved the problem by die-cutting the window into the box board when it was flat, then we developed a paper wrap to cover the raw edges. This meant the box had to be hand-finished to achieve the look we wanted.

Finally, the boxes were ready for production. We registered the name as a trade mark, and we produced a range of 6 different colours. We produced unique British Bidder bidding cards (pictured below) as a separate project. 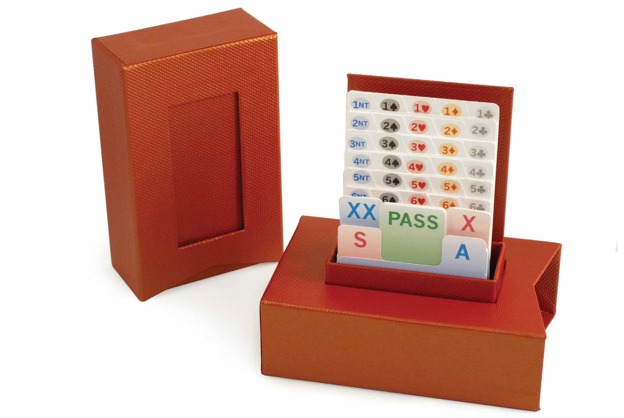