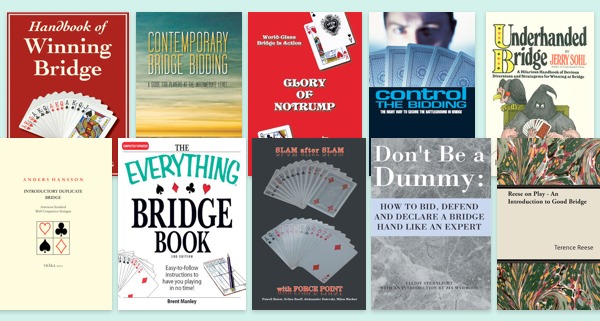 Do you love to read about the card game Bridge but just don’t have the room for any more books on bridge? Then maybe Bridge eBooks are the answer to your prayers. Our Top 10 Bridge eBooks is a round-up of the best contract bridge eBooks and duplicate bridge eBooks that are available for you to download to your iPad, iPhone or Mac computer.

Disclaimer: the links to the app store are affiliate links meaning that we earn a percentage IF you decide to purchase an eBook. It helps us to subsidize more helpful content like this in future.

The first book in our Top 10 Bridge eBbooks is Contemporary Bridge Bidding – A Guide for Players at the Intermediate Level by Leif B Sorensen, is intended for those who are familiar with the fundamentals of duplicate bridge. Contemporary Bridge Bidding is aimed primarily at intermediate players with a range skills, who are keen on improving their bidding. The main focus of the book is on the two-over-one game force, which comprises a bidding system that has gained enormous popularity in recent years. The last two chapters are devoted to an introduction of two systems that are widely played around the world: Precision Bridge and Acol Bridge.

Introductory Duplicate Bridge – American Standard With Competitive Strategies by Anders Hansson teaches the basics of duplicate bridge. The bidding system used is American Standard. Examples are used throughout the book to explain how you should bid and play the game. Every chapter ends with a summary of what you should remember. There are additional examples for each chapter that you may use as practice deals. The contents of Introductory Duplicate Bridge is structured in such a way that you can at first just read parts of it to get a very basic understanding of the game. Once you have a grasp on the basic elements, you’ll find yourself going back to read more detailed sections. In this way Introductory Duplicate Bridge will accompany you on your way to becoming a strong intermediate player.

Handbook of Winning Bridge by Edwin Silberstang is a thorough introduction to the game of bridge, filled with lots of examples, illustrations, and anecdotes. Beginning and intermediate players learn step by step everything they need to know about: duplicate bridge, contract bridge, rules of play, fundamentals of opening bids and responses, and scoring. You’ll also learn the strategies that allow you to compete in tournaments including the proper evaluation and playing out of hands. Includes coverage of the Jacoby Transfer, Cue, Weak Two, Michaels Cue, Shut-Out, Slam, No-Trump, and advanced, defensive and preemptive bids to the popular and important conventions including, the Stayman, Blackwood, and Two-Way Stayman.

Underhanded Bridge by Jerry Sohl is an amusing, lighthearted examination of the crazy world of rubber and duplicate bridge, and the men and women who populate that strange milieu — with a heavy but hilarious accent on the tricks and ploys employed by dedicated bridge fiends to win games, master points, and/or money.

Control The Bidding – The Right Way to Secure the Battleground in Bridge by Paul Mendelson is for the serious competitive bridge player who realises winning requires control of the bidding. Even before a card is played you must fight for the high ground or hustle your opponents beyond their safe level. Pro-active and fearless but not reckless in this hugely exciting partnership arena, you must judge every last auction nuance and, terrier-like, destroy your opponents’ communication and confidence whilst enhancing your own. Dodge their snares, resist their ploys but win the high stakes by forcing them to gamble – yourself delivering their misfortunes – and by your willingness to bet on certainty. Paul has also authored the companion volumes Bridge for Complete Beginners and The Right Way to Play Bridge, the leading book for the improving player.

Glory of Notrump – World-Class Bridge In Action by John Sheridan Thomas shows you how to win bridge tournaments or to excel at rubber bridge by bidding and playing superior notrump contracts when most others are playing in suit strains. It describes how world-class experts bid and played notrump contracts in championship tournaments, including the Bermuda Bowl, the Venice Cup the World Team Olympiad, and others. John Sheridan Thomas has also written Standard American 21 , the book that has become the gold standard for modern rubber bridge players.

7. The Everything Bridge Book

The Everything Bridge Book by Brent Manley shares with us that this long standing card came is popular again! Whether readers are learning bridge from scratch or looking to improve their game, The Everything Bridge Book is the ultimate contract bridge manual. Bridge master Brent Manley takes you step by step from the rudiments of bidding to the more advanced principles of tournament play. You learn how to:

Brent Manley has also written some brilliant associated titles that are also worth taking a look at Tao Of Bridge – 200 Principles To Transform Your Game And Your Life and The Little Book of Bridge – Learn How to Play, Score, and Win

8. Slam After Slam with Force Point

Don’t Be A Dummy – How to Bid, Defend and Declare a Bridge Hand like an Expert by Elliot Sternlicht covers basic bridge principles relating to all three aspects of bridge – bidding, defending and declaring a hand. In this book Elliot has imparted his knowledge and ideas learned over twenty years of playing high-level tournament and rubber bridge.

10. Reese on Play – An Introduction to Good Bridge

If you found this round up of Top 10 Bridge E-books then we’d love to know. Be sure to leave a comment below.

We also use cookies served from google analytics that help us to analyze and understand how this website is being used while maintaining anonymity. These cookies will be stored in your browser only with your consent. You also have the option to opt-out of these cookies. But opting out of some of these cookies may have an effect on your browsing experience.
Necessary Always Enabled