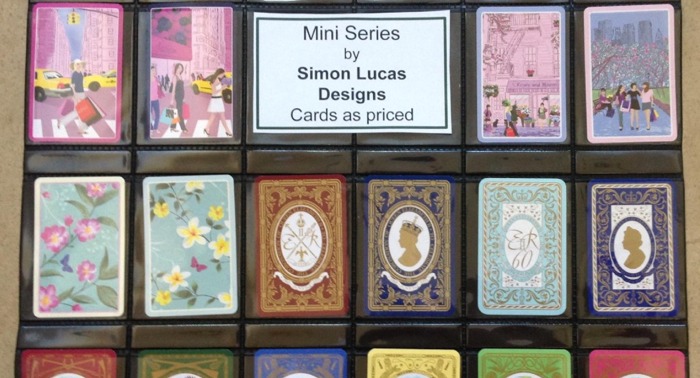 The Beginnings of the Melbourne Playing Card Collectors (MPCC)

Hilda Hulsbergen our immediate past President for 25+years and now Public Officer of the MPCC remembers how Card collecting had been a passion of hers, when as a six year old she obtained her first cards – blank backs and ‘extra’s from decks in use (most decks had two blank cards in case a card was damaged/lost and Jokers). There were avid collectors of decks and many people had collected like Hilda the blank cards and Jokers from decks.

Hilda first met a Mr Ernie Colhoun, the gentleman who started the concept of swap cards, about 1967. In conversation she was fortunate enough to hear his story about the beginning of Swap Cards.

“I had just returned from World War 2 and was looking at a way to make ‘an easier living’. The ‘horrors of the war still a vivid memory’. I had an idea after, realising that “Boy’s had Match Box Cars and Scanlan type football/sport cards. Girls had nothing”.

Ernie set about purchasing large numbers of decks with suitable designs (Blue Boy, Blue Girl, cats, dogs, flowers etc.) from Myer, Buckley & Nunn and other big department stores in Melbourne. He divided these decks and made bundles of assorted cards.

His idea was that girls would purchase single cards and then ‘swap’ to make matching pairs. They did not have to buy decks.

The next step in Ernie’s plan involved approaching all Toy Shops and Newsagents in and around Melbourne and regional areas and selling bundles. The idea spread and it was not long before repeat orders were being requested or new businesses were ordering cards.

By 1950 Hudson Industries (Melbourne) were already printing decks and blank back cards for G.J.Coles and other large department stores.

Not long after she became re-acquainted with Ernie, he sold his business to friends of Hilda’s, Margaret and Colin Kingsland. She is not sure whether it was Ernie or the Kingslands who approached Hudson Industries, as there were not enough suitable designs of blank back cards. An agreement was reached and Hudsons provided pretty girlie images as blank backs (ie: not playing cards with pips) in 200-500 card lots of each design. This proved to be an instant winner and business boomed.

Hudsons also produced paper albums with ‘Swap Cards’ on the cover for collectors to keep their treasures. Up until then collections had been in an assortment of receptacles – anything to keep one’s cards safe.

In 1971 a group of five ladies, who like Hilda had been collecting cards, realised that there were a huge number of other collectors and researched the idea of starting a ‘Swap Card Club’

In their investigations they realised that there were in fact other card clubs worldwide; however overseas collectors originally collected full decks of cards and trading was the method of distribution.

These five ladies contacted Chicago Playing Card Collectors Inc. (founded in 1951) for guidance . On the 11th October 1971 a letter formalised the alliance between the two collecting groups. Initially MPCC was a chapter of the CPCC interested Australian collectors had to also belong to the parent body. In 1982 this changed and with the CPCC’s blessing MPCC ran as an autonomous Club.

The MPCC initially met in Members homes and then followed a succession of halls from Brighton to Balwyn. Finally in 1984 the Club moved to Alkira in Thurston Street Box Hill. Alkira is a facility for people with intellectual disabilities and we have been so fortunate to have been able to continue meeting there as the meeting room is big, bright and we have cooling in Summer and heating in Winter. Alkira is always our designated Charity with any of the Fairs we conduct.

Interestingly in the early years of the MPCC one of the founding Members ( there are still two who belong to the club 45 years later and we have others who have been continuous members for 40 + years) started a Juniors group in Bacchus Marsh. This was a very successful venture for over ten years and allowed youngsters to be more involved with collecting.

During the mid-80’s the collecting of cards declined as there was a ban on cards at school premises, for both girls and boys. There had been theft, arguments and unfair trading. Schools could not protect student’s collections.

However the Melbourne Playing Card collectors continued as a hobby group, keeping the local tradition alive, purchasing decks, breaking them up and then sharing them with other collectors.

To-day we have Members from all states of Australia and also from Overseas including members from CPCC.

Since the initial concept of ‘swapping’ there is now ‘buying’ and the internet has allowed an incredible resurgence of availability. Collectors can purchase worldwide.

Lately there have been a number of businesses who have started their own range of cards copying the concept started by Coles and Woolworths, 50+ years ago. Daisy Lane (a beautiful line is no longer active); but Forever Clover is thriving, Spodooki has commenced producing cards and others are making and distributing their individual designs.

Melbourne Playing Card Collectors has also produced its own range of 21st century new age blank back cards and meets monthly on the first alternate Saturdays and Sundays of each month at Alkira.

We also have two Fairs a year (Autumn and Spring). At both general meetings and fairs visitors are offered the opportunity to view/purchase literally thousands of cards.

‘Swapping Cards’ is in all probability no longer practiced; but the terminology of Swap Cards is still used world- wide and describes cards both blank back and pips (those from decks) that are available for collection.

It was Ernie Colhoun, in Victoria, who started the concept of ‘swapping’ individual cards and from him we have a tremendous legacy of avid collector.

If you’d like to know more about collecting playing cards and the MPCC (which is a not for profit community organisation), you can visit the MPCC website or their Facebook Page. To see the range of Simon Lucas playing cards that are featured as a Mini Series by the MPCC, browse our presentation boxed playing cards section.

Do you Collect Playing Cards?