Cribbage: How To Play And Win by Frank Buttler, Simon Buttler 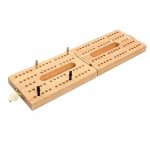 Need a Cribbage Board?

Take a look at our handy, compact and affordable Folding Cribbage Board

Cribbage: How To Play And Win by Frank Buttler, Simon Buttler

A lucid and intelligent guide to winning at cribbage.

Thought to have been invented in the 17th century, cribbage remains one of the oldest and most popular card games for two or more players. Cribbage How to Play and Win is in two parts, the first introducing the game to those who have never played it before, and the second, much larger, part explaining the intricacies of the game to more experienced players and giving guidance to improve the chances of winning.

Both the original five-card game and the more modern six-card variety are described in detail, and the authors demonstrate how to gain the maximum advantage from any of the countless card combinations possible during play. Numerous examples are included to illustrate the subtleties of each stage of the game, written in easily understood tabular form and checked by computer programs.

Frank Buttler, former Head of Inorganic Chemistry at Teesside University and an industrial consultant, has written many scientific papers and books. Simon Buttler, his son, is a computer systems analyst, project manager and consultant and also an archaeologist.

Be the first to review “Cribbage: How To Play And Win by Frank Buttler, Simon Buttler” Cancel reply

We also use cookies served from google analytics that help us to analyze and understand how this website is being used while maintaining anonymity. These cookies will be stored in your browser only with your consent. You also have the option to opt-out of these cookies. But opting out of some of these cookies may have an effect on your browsing experience.
Necessary Always Enabled