Part 2 – Whist Variants – What are They? 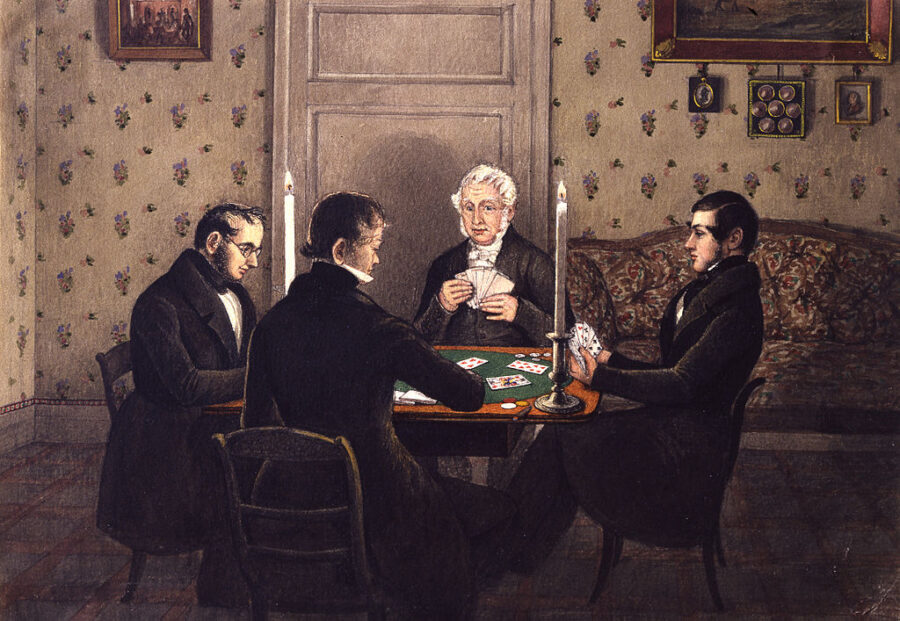 The basics of whist can be varied significantly to create interesting and challenging new games. Here, Brian Furniss outlines some of his club’s favourite variants of the game, with an overview of how to play them

When playing “semi-partner” whist, you stay and play with the same partner so long as you win your game. When you lose your game both you and your partner separate and move in opposite directions to the next table. Play is as described in last weeks “Basic Whist“.

In “full sequence pairs” whist, you play with the same partner for the duration of the drive. Your score card indicates which numbered table you need to be at for each individual game and in turn ensures you play against all other pairs in sequence. Play is as described in “Basic Whist”.

Unlike basic whist, each player elects to play a “colour” as opposed to a lady or gent. The colours are usually yellow, blue, red and green. To start off with, yellow and blue play together opposite red and green for the first set of four games/hands. At the start of each of the four games each player in turn will shuffle and deal the cards.

After a set of four games has been played, each player moves as indicated on their score card. This will either be up one table, up two tables, down one table or down two tables. When players move to their next table they should ensure they sit opposite the partner indicated on their score card. The process is then repeated for each set of four subsequent games.

Probably one of the most interesting types of whist to be played today and certainly the most popular in our Club by far. The game is played in teams of four. Each team nominates a “captain” and the other three team members are known as “scouts”.

Each team is based at a table where the captain remains throughout the drive. Each of the scouts take it in turn to partner the captain to play against two players from a visiting opposing team, whilst at the same time the other two scouts play at one of the other teams table. At each table the captain shuffles the cards, one of the opponents cuts the cards and they are then dealt starting with the player on the left of the captain who also has the first lead of the game. So in essence, visiting opponents have the lead at your table whilst the two scouts playing away from their home table have the lead against the team they are playing away against.

The card tables are arranged around the border of the room and two scouts from each of the teams progress clockwise around the room playing at each of the other team’s table in turn. At the start of the drive each captain is given a set number of trophies which he only gives away to winning opponents. After each game the returning scout to each team, after having played away, returns and brings with them any trophies they may have just won. The major difference in Military Whist is that the objective is to win each game by taking seven or more tricks. Each game is played for a different point value trophy such as “flags”, “trenches”, “guns”, “tanks”, “planes”, “royal standards” etc.

Bonuses in the way of “spitfires” are awarded by the M.C. when ten or more tricks are scored. Usually one for ten and eleven tricks, two for twelve tricks and three for thirteen. At the end of the drive, each team returns to their “home” table and the total point score of all trophies won are calculated.

Next Week –  An In-Depth How to Play Whist Guide

If you enjoyed reading about the different types of whist variants that can be played and are interested to learn more about playing whist, then next week we’ll be posting an in-depth How to Play Whist Guide. Like this overview on Whist Variants, it has been skillfully put together by Brian Furniss.